It is said that if 3.5% of the population, across all classes, are prepared to change substantial aspects of their way of life, this will set in motion a profound change in society. 3.5 %, that doesn’t sound so much. And the question inevitably arises as to whether one actually (already) belongs to it. It is all too clear that in many respects it is now time to act. This Now is both a challenge and an excessive demand, it sometimes puts us in a state of shock of helplessness, in view of the daily unsolvable, from changing labor markets to social inequality, from Trump to climate crisis (cf. Wei Sraum 2019).

But how can the pressure to act, which the conditions inevitably impose on us, become a positive call for departure, a protest against and visions for something? And in the best case scenario, make us want new utopias? What shape do we want to give to the future? How can we create the world instead of consuming it? And – how political can, should or must design be? Especially in times in which complexity often seems overwhelming on the one hand, and, as Kris Krois states, (false) simplification, fear and superficiality in hyper-accelerated media on the other, threaten democracy?

Questions like these are at the centre of my teaching for Transformation Design at the new design university (ndu) in St. Pölten, where the aim is to develop concepts for sustainable, resilient, inclusive and socially equitable processes and, at the same time, to make them accessible, comprehensible and experienceable (as prototypes or ‘real products’). For example, when it comes to how an eco-social change can succeed with regard to local potentials and their development in a globally networked world.

For behind the visible things that surround us there is an invisible, social dimension (cf. Burckhardt 2012), and we are inevitably involved in shaping this, too – whether consciously or unconsciously. Thus, we have a mirror situation: On the one hand, we have an effect on the environment. On the other hand, the changed environment has an effect on us. Here, too, reciprocal processes of transformation can be identified.

Transformation Design focuses on recent social developments towards a more sustainable, socially fair and inclusive way of life, work and production. It questions both the consumption and production patterns of late-capitalist growth societies from a cultural, social, technological and ecological point of view and initiates corresponding processes of change from the perspective of consumers or users. Transformation Design thus describes the search for new ways of changing behaviour and thus provoking a change in society on the basis of new forms of design discourse and design practice.

It shows a kind of paradigm shift: away from a user- (or worse: a consumer-) oriented design towards a society-centered design. Designers play a central role here, not least mediating between different stakeholders. But what exactly is being transformed? And by whom? Who participates in the associated processes? Who is excluded and why? What does “social”, “sustainable” and “political” mean in this context? And what does all this have to do with design? Together with NDU students, this has been explored theoretically and practically.

When considering transformations in societies, it is first possible to identify overriding topics such as technology, politics, social issues, economics and ecology. Chiara Welter[1] points out, however, that the concrete problem areas can hardly be categorized by these abstract concepts. Rather, the transformation design – understood as a form of reflection on social change – can reveal the multiple interrelationships and dependencies of our reality(s). For example, a transformation in the economic system through crypto currency can hardly be conceived without the technological requirements and changes or the political aspects of the democratization of payment systems. Further ecological and social impacts can be thought of that would be reflected in this example.

Stadt für alle? Participation does not become less when you share it. Is Vienna really a City for All? Chiara Welter has her doubts about it and wrote an Open Letter to the city (soon to be published here). (Key Visual of the Project „Mariahilfer Straße neu! Der Prozess zur Umgestaltung und Neuorganisation.“ © 2015 Magistrat der Stadt Wien)

It is inevitable that design is oriented towards a certain canon of values. Such a value-oriented design has the potential for change, which sees itself precisely not as the executive branch of marketing (cf. Koop 2019), but as a motor for transformation processes. For utopia, as an idealized counter-image to what is, can be a strong motor for change. Positive perspectives are becoming increasingly important as a counterpoint to the flood of bad news and manipulatively used dystopias. The contribution of designers can be to visualize an alternative world and to make the thought experiments of utopias tangible.

top: Turning the bad habit of ‘throwing away’, into a ‘creative act’: These cigarette butts contain plant seeds, so you can actually throw them away like little seed-bombs. “We don‘t smoke, we plant!” – ZIGGISEEDS by Alexander Guschelbauer, Gregor Sabitzer and Victoria Bersch. middle: Transforming Gender: Awareness campaign on menstruation issues by Luca Hierzenberger and HelenaZobl. down: With their “Omnication” App, Bernd Reichl and Bernd Schallagruper are intended to create a barrier-free, universal form of communication. People, regardless of their educational level, origin, age, gender and culture, should have the opportunity to exchange information quickly, easily and comprehensibly. 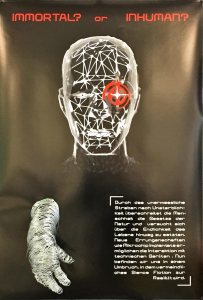 Immortal or inhuman? By the immeasurable striving for immortality mankind exceeds the law of nature and tries to ignore the finiteness of life. New achievements such as microchip implants enable interaction with technical devices. Now we are in a state of upheaval in which supposed science fiction is becoming reality. Are we going to be immortal by becoming inhuman? Question raised by Anna Lederleitner, Philip Huter und Kimberly Waechter

“Utopias need time, opportunities, the courage to experiment with thoughts, to try them out, to be creative, to be playful, even to be mistaken. Utopias must remain open,” says cultural scientist Thomas Macho (2017). 500 years ago the English statesman and diplomat Sir Thomas More invented a new word by describing the distant, ideal society “Utopia” (and by the way created a world classic in the field of social philosophy): literally translated as “non-place”, in the figurative sense it is what is not, but should be.

Since then, utopias have had their high and low phases, they have been abused as ideologies and today are often replaced by a “pragmatism without alternative” – and yet they are experiencing a revival. Current utopias want to counter complex problems, which are mainly met with fear and excessive demands, with positive options for action. Thus, everyday utopias (cf. Bieling 2020) are left over from the large-scale utopias of the past, whose “courage to fantasy” and creative approaches to action are intended to bring about a large-scale change in consciousness. Creative-artistic disciplines become an open field for experiments with the claim to give utopian thoughts a concrete place and a concrete form. (cf. Wei Sraum 2019, 17).

In urban contexts this can often be localized in public urban space. A space that continues to be the venue for protests and that is currently in an increasing hybridization with virtual space, which in turn brings with it its own mechanisms for disseminating information and at the same time adopts practiced strategies and viewing habits.

Protest, resistance and political agitation are centrally related to the power of (not ifrequently visual) messages (cf. Bieling 2019). They live from symbols and strong images that confront, appeal and challenge us to confront. From resistance to war, poverty, human rights, feminism and climate protection, to the Occupy movement, the Arab Spring, criticism of globalisation and consumption – subjects have always been developed to formulate resistance that have sometimes been deeply imprinted in our collective memory.

Design and its conceptual, functional, aesthetic, speculative and interventional concepts can assert an oppositional public sphere (c.f. Hoffmann 2014, 184), it can actively interfere in common definitions, understandings and opinion making, and it can create effective outrage through critical, alternative and interrogative concepts, thoughts, and prototypes.

Here, it becomes obvious how many (different) actors have to sit at the same table in order to really be able to take action against the multiple crises of our time. Plus: It is not about style, not about typology, but about the general approach and attitude. The grassroots movement alone is not enough; new alliances are needed. Bottom-up and top-down must cross. Municipal governments, non-profit companies and NGOs must work together with citizens’ initiatives and activists.

Self-evidently, the design of products, technologies, services, systems, virtual worlds and tangible objects always implicitly transmits role models and values. Design and the images it disseminates, often unreflectively, are hence unavoidably political. There is no doubt that the scope of action for designers also involves increasing awareness of the sociopolitical dimension of their design activities, in particular when it is a question of recognizing the power of their designs to exclude (or include), and of critically interrogating this power (Bieling 2019a).

Thus, undoubtedly this is what design can do. It can “reconnect the disconnected and make new connections. [It] can challenge the underlying, implicit ethics of the explicit forms we create. […It…] can disturb current narratives. [It] can rupture the present with counter-narratives[2] [and] contribute to reformist approaches. It has the ability to catalyse societal transformations. Design is critical imagining.” (Fuad-Luke 2009, XXI). It can communicate, make understandable and is able to develop ideas and alternatives, and last but not least release positive energies. Energies that can help to open your mouth.

And when 3.5% open their mouths, it could get pretty loud.

[1] c.f. her paper on Defensive Architecture in our upcoming issue.

[2] These counter-narratives might be a starting point to give rise to counterpublics (c.f. Michaelsen 2014, 394) and finally what Tim Gee describes as counterpower (Gee 2011). It can also foster the beginnings of a “counter-hegemony”, too, that is “the critical questioning of dominant norms as well as the formation of alternative political ideas and communal solidarity within civil society.” (c.f. Michaelsen 2014, 395)

„Critical Care – Architecture and urbanism for a broken planet (Fitz/Krasny 2019). The Exhibition at Architekturzentrum Wien triggered some lively discussions amongst the student group (All Photos: Tom Bieling). 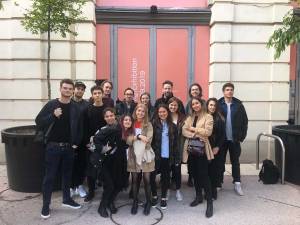 Transformers on a field trip in Vienna.