Positions on Emancipation: Architecture between Aesthetics and Politics

Posted on April 2, 2017 by designabilities 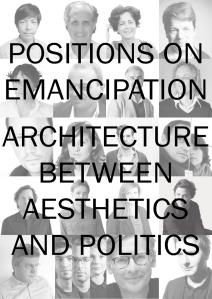 The blurred lines of architecture between aesthetics and politics have been discussed during the “Positions of Emancipation” Symposium at University of Luxemburg (Schengen), over the last two days. Architecture has been largely characterised by a lack of clear positions, at a time when its challenging context demands increasingly strong gestures. As Kenneth Frampton recently highlighted, the recession of the educational and emancipatory moment of the modern discourse has made room for a neo-liberal indifference, whereas technological modernisation has kept unravelling, posing novel socio-ecological challenges.

Indeed, since the End of Great Narrations the majority of architectural production seems much less connected to theory. Theorising architecture has been increasingly preoccupied with architectural critique, and governed by institutionalised disciplinary frameworks whose pressure for scholarly evaluation generates a proliferation of ‘introvert’ academic writings.

At the same time, the multifaceted expressions of a ‘society of crisis’ have produced a tendency in architecture and urban design to explore the potentiality of autonomy within these disciplines through a novel exploration of architectural syntax. Architectural theory seems to have lost its instrumentality, within a challenging context which demands the design disciplines to re-renegotiate their agency in the production of space.

Nevertheless, a new set of tendencies seems to refute Frampton’s statement: We can increasingly observe new attitudes which try to address architecture and urbanism in a more systematic – even some times ideological and doctrinal way, engaging directly with the complexities of social, political and ecological challenges that characterise the recent state of globalised urbanisation.

Within this shifting context, these attempts tend to integrate different kinds of research parameters into the design process, exploring the capacities of interdisciplinary approaches. Against the postmodern or post-historic ‘anything goes’, they promote a concordance of conceptualisation, methodological integration and critical action, interwoven with a renewed interest about the structural and typological formation of spaces. A new social and political influence of our discipline is again claimed, without thrusting aside the aesthetic dimension of architecture, or its formal expressions, but rather through their instrumentalisation into meaningful spatial interventions.

As the conditions within which architecture and urbanism are produced become more and more complex, and less and less stable, this attitude and especially its projective capacity is naturally vulnerable. Now, to what extent is it able to take into account the complexities of the socio-political, economic, ecological and cultural aspects that characterise the production of space under globalised urbanisation? Which architectural and urbanistic approaches might fulfill the postulated social and political ambition? And which would be the consequences on writing about, and teaching architecture and urbanism?

These amongst other questions were being discussed with protagonists representing seminal paradigms within this broader tendency, confront their positions and engage them in oppositions with more sceptical actors.

Edited transcripts of the presentations and discussions will be documented and published soon. We will keep you posted.