The Apparatus of Racism

Posted on March 6, 2017 by designabilities 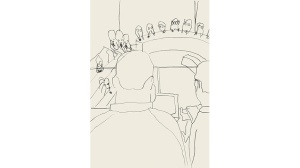 For over a decade, the “National Socialist Underground” (NSU), a neo-Nazi terrorist group, carried out an unprecedented series of murders across Germany. For a long time, and until the terrorist cell exposed itself, the interpretive horizon of the media, politicians and the authorities excluded racist motives. The Apparatus of Racism jump-starts an international debate about the NSU complex as a composite of neo-Nazi terror, institutional and structural racism within the context of German history and within the longue durée of colonialism, migration and genocide in the globalized modern age.

What agency does racism possess as a formative factor of modern societies? How does it inform collective thought and the cognitive processes of Western knowledge systems? How does it replicate itself within society’s functional apparatuses of state, politics, law and justice? Within what exploratory spaces can we analyze structural racist formations and violent excesses? How can the experiences and circumstances of various migration societies put these into perspective?

In preparation for the People’s Tribunal Unraveling the NSU Complex, lectures and commentaries by international experts and activists across disciplines will trace the past, present and latest configurations of racism in its structural and global manifestations.

The Apparatus of Racism is being organized by the People’s Tribunal Unraveling the NSU Complex in cooperation with HKW prior to the eponymous event, which was initiated by anti-racist and migrant networks, civil rights groups and individuals in order to publicly denounce and unravel the NSU Complex.

DESIGNABILITIES is an open-access journal established since 2009, managed and edited by.... https://designabilities.wordpress.com/team/
View all posts by designabilities →
This entry was posted in Conference and tagged hkw berlin, nsu, racism. Bookmark the permalink.