Posted on April 8, 2014 by designabilities

The term Accelerationism, describes a contemporary political heresy, which is the insistence that the only radical political response to capitalism is not to protest, disrupt, critique, or détourne it, but to accelerate and exacerbate its uprooting, alienating, decoding, abstractive tendencies. From Marx to cyberculture, from rave and acid house to underground culture this book discusses a range of examples of accelerationism. 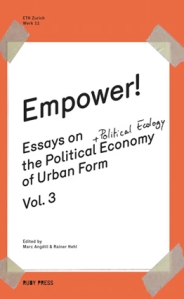 With their third Volume of Essays on the Policital Economy of Urban Form (after Vol.1 “Informalize!” and “Collectivize!” Vol.2), Marc Angélil and Rainer Hehl collected projects that address contemporary power relations and their effects on urban and natural landscapes in the age of the Anthropocene, a nascent geological epoch defined by human activity. Covering geopolitics in the Amazon, infrastructural subtraction in Ecuador, circulatory urbanism in Mumbai, and urban development on Brazil’s frontier, this edited publication explores urban transformations through the added lens of political ecology, in order to better understand the political, economic, and social factors of humanity’s profound effects on the biosphere.

They Can’t Represent Us!
Reinventing Democracy from Greece to Occupy
by Dario Azzellini and Marina Sitrin

Dario Azzellini and Marina Sitrin compiled different views on how the new global movements are putting forward a radical conception of democracy. And on how international, global and regional mass protest movements share an agenda—to raise the question of what democracy should mean. Recent movements, including Occupy, put forward the idea that liberal democracy is not democratic, nor was it ever. Together they exercise and claim participatory democracy as the ground of revolutionary social change today.

DESIGNABILITIES is an open-access journal established since 2009, managed and edited by.... https://designabilities.wordpress.com/team/
View all posts by designabilities →
This entry was posted in Uncategorized. Bookmark the permalink.