Posted on April 2, 2014 by designabilities 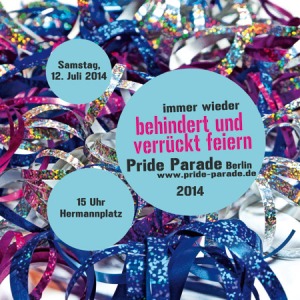 “Freaks and Cripples,
Lunatics and Gimps,
Deaf, Crazy, Blind or just ordinarily weird people
– come out into the streets again, because we own it!
We were many, we will be more!”

Put barriers in the museum, it’s time to break out of our boxes, be who you want to be, not who they say you are!  Kiss madness awake, love crooked legs and spasms, desire crutches and catheters. We unsettle und seduce and we are louder than the norm. Roll, limp and grope your way to Hermannplatz, July 12th at 3pm.

Party with us at the behindert und verrückt feiern Disability & Mad Pride Parade 2014 in Berlin.

DESIGNABILITIES is an open-access journal established since 2009, managed and edited by.... https://designabilities.wordpress.com/team/
View all posts by designabilities →
This entry was posted in activism, freak and tagged 2014, Berlin, demo, disabilty, freaks, party, pride parade. Bookmark the permalink.